There will be no more foaming at the mouth of the Hudson—at least not from the Hoboken side—as the City has effectively banned the use of single-use Expanded Polystyrene (EPS), commonly known as styrofoam. Furthermore, the City has doubled-down on its existing ordinance, moving to ban ALL carry-out plastic bags from food service and retail establishments.

This new legislation comes months after Hoboken’s Plastic Bag Ban initially rolled out on January 22. Most Hoboken businesses adhered to the intent of that law—however, as first reported here on hMAG.com in Feburary, certain retailers were exploiting a confounding loophole in the legislation by offering thicker plastic bags—”reusable” plastic bags, at least 2.25 milliliters in width, that can carry a minimum of 22 pounds, and can be used at least 125 times. Critics argued that simply using thicker plastic was undermining the whole environmental intent for of banning plastic in the first place. Thanks to a unanimous vote in last week’s City Council meeting, that loophole is now closed.

“Hoboken is once again leading the way in promoting policies that will help improve our environment,” said Mayor Ravi S. Bhalla. “By eliminating single-use styrofoam products and all carry-out plastic bags, we are substantially reducing pollution on our streets and in the Hudson River, as well as non-biodegradable waste in our landfills. I thank the Hoboken Green Team for partnering with the City to implement this ban, and the City Council for their support.”

“Styrofoam isn’t biodegradable, can’t be recycled, and is a threat our environment and health,” said Bhalla. “Hoboken is committed to environmental sustainability, and this proposed ban will allow us to do our part to reduce harmful landfill waste and encourage the use of safer alternatives.” 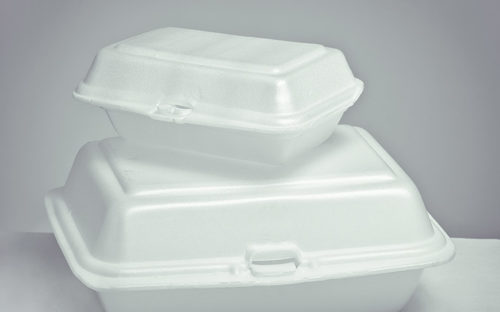 The U.S. Department of Health and Human Services has added styrene to its list of known or possible carcinogens. Because styrofoam can last in landfills for 500 years or more, it has been banned in other cities—including New York City, San Francisco and Washington.

The ban will impact a number of food retailers, who currently use styrofoam for take-out or delivery. However, many restaurants have weaned themselves off the substance over the years, in response to consumer demands or their own commitment to finding better alternatives for EPS.

THE STRUGGLE IS WHEEL: Hoboken Backpedals on Plans for Bike Lanes on Washington Street

Fridays Are For Frank: “Put Your Dreams Away” / Mile Square Theatre’s “A Midsummer Night’s Dream”

SICK OF THIS $#!+: Hoboken Residents Calling Out Negligent Dog Owners For Failing to Clean Up After Pets