(ABOVE: Donald Trump, his former wife Ivana, and Frank Sinatra)

On Tuesday, President Donald Trump closed out his lively State of the Union address with the phrase, “The Best Is Yet to Come.”

Obviously we here in Hoboken saw that as a nod to Frank Sinatra (because it’s Sinatra’s world, we just live in it). In fact, the Hoboken Mayor Ravi Bhalla used the same phrase just last week in his State of the City address, with proper attribution:

“Because for Hoboken, and for all of us – as the great Frank Sinatra once said – the best is yet to come.”

“The Best Is Yet to Come” was composed in 1959 by Cy Coleman with lyrics by Carolyn Leigh. Frank Sinatra recorded it on his 1964 album It Might as Well Be Swing along with Count Basie—under the direction of Quincy Jones. It happens to be the last song Sinatra sang in public, and the words “The Best Is Yet To Come” are carved into Sinatra’s tombstone in Palm Springs, CA.

Not the first time Trump has worked Sinatra into his show. He famously selected “My Way” as the first dance at his Inaugural Ball in January of 2017.

Frank’s daughter, Nancy Sinatra, was once asked if her father would support the Trump Presidency. “NOT A CHANCE,” she responded. “Do your homework before you speak about Frank Sinatra.” 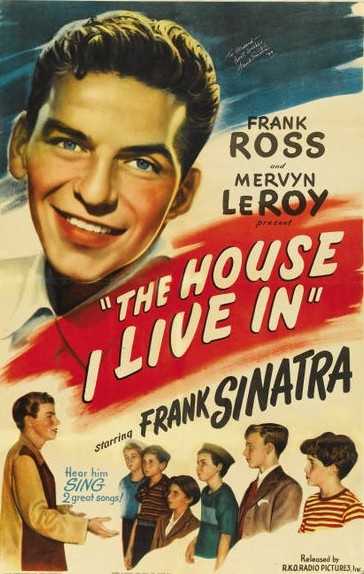 Frank Sinatra was a lot of things—he wore his personality flaws on his sleeve, and by 1945 he had already managed to make a name for himself as a short-tempered hot-head with some anger management issues. But one thing Frank was not, was a bigot.

He despised all types of social bigotry—as a man who clawed his way out of the backstreets of Hoboken to ascend to the forefront of the world stage, Frank recognized the potential in all people, regardless of their backgrounds.

With post-war America starting to slide back into the rut of intolerance, Frank starred in a ten-minute short film called The House I Live In, written by Albert Maltz, produced by Frank Ross and Mervyn LeRoy.

In the film, Frank spots a gang of kids chasing a Jewish boy down an alley. Frank intervenes, discusses the diversity in his own life growing up as a kid in Hoboken, and why it is important to accept all Americans, regardless of race, color, creed or lifestyle.

While Nancy stands by her story, you could always take it directly from the Chairman of the Board himself.

In 1990, Sinatra was seemingly slated to play the opening of Trump’s now bankrupt Taj Mahal in Atlantic City. When it came time to discuss the numbers, Trump allegedly tried to low-ball Frank.

According to the story from his business manager, Sinatra responded by saying Trump could, “go $*% himself.”

Here’s Presidential Medal of Freedom winner Frank Sinatra, with “The Best Is Yet To Come”: