The City of Hoboken today officially made an offer to purchase the Union Dry Dock for $13.1 million, nearly a month after the City Council voted 9-0 to authorize the use of eminent domain and acquire the property from NY Waterway for a public park. The City claims the price matches the fair market value of the land, as determined by an independent appraiser, and that the offer is, “the first step in good faith negotiations.”

“The offer we made today reflects Hoboken’s ongoing commitment to acquiring Union Dry Dock for a public waterfront park,” said Hoboken Mayor Ravi Bhalla. “We will diligently continue the necessary steps of negotiating with New York Waterway to fairly compensate them for the land. I look forward to completing this process so Hoboken can finally connect our waterfront for all to enjoy.”

NY Waterway purchased Union Dry Dock in November of 2017, set on converting the the last functioning maritime business on Hoboken’s once-bustling industrial waterfront into a ferry fueling and service dock.

Hoboken advocacy group Fund For A Better Waterfront had long been urging the City to act on obtaining the 3.15-acre property, which remains a central piece in the effort to create a contiguous public waterfront along Hoboken’s Hudson River shoreline.

NY Waterway, which has sold its longtime facility in Weehawken to real estate developers, maintains that Union Dry Dock is the only place that will accommodate the regional ferry service provider’s needs, per a study by NJ Transit—a claim Hoboken has refuted with its own study.

“On behalf of the 32,000 New Jersey commuters we carry every day, and the thousands of
additional commuters we carry in emergencies, NY Waterway will continue to fight for Union
Dry Dock,” said NY Waterway President & Founder Arthur E. Imperatore in a statement last month. “This site is critical to our ability to provide the safe, reliable, environmentally-friendly service on which New Jersey commuters have come to depend—and to our ability to respond in emergencies.”

A judge recently tossed NY Waterway’s lawsuit over a stop work order issued by the City of Hoboken, stating that the ferry’s claim of a pending regional transportation crisis was “unsubstantiated.” 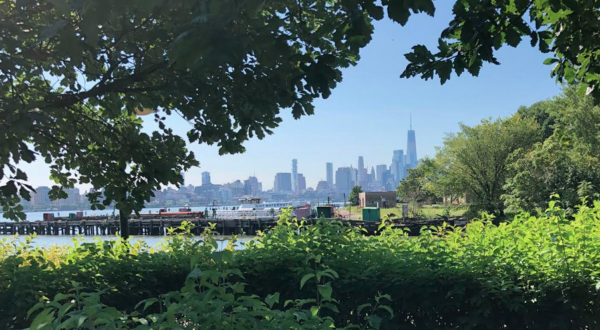 STROLLING OUT: Newell Brands HQ Heads Back to Atlanta, Leaving E-Commerce in Hoboken

Hoboken Grace Covers the City with Volunteers at 1Day Hoboken

EDITORIAL: LET FREEDUMB VAPE — Do We Really Want to Make THIS Guy The Hero Here??? | OPINION