According to historical records, the New York Nine defeated Cartwright’s Knickerbockers, 23 to 1, in four innings at Hoboken’s Elysian Fields, which were located near the Hudson River, at about 11th Street.

Hoboken will celebrate the 172th Anniversary of ‘base ball’ at Dobbleaar Field – Stevens Institute of Technology – 8th and Castle Point, Hoboken. 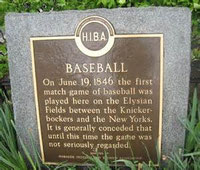 A vintage ‘base ball’ match will be hosted by the Hoboken Nine at 1 p.m.

Game will be played with rules, uniforms and equipment from 1846—replica 19th century bats and balls, no gloves.

Come on out and root, root, root for the home team!

To learn more about Hoboken, baseball and the Stevens family’s impact on the city, visit the Hoboken Historical Museum.

FRIDAYS ARE FOR FRANK: “You Will Be My Music”

READ ALL ABOUT IT: The Hoboken Public Library Celebrates 125 Years of Greatness and Community Leadership

FRIDAYS ARE FOR FRANK: “Have You Met Miss Jones?”

FRIDAYS ARE FOR FRANK: “River Stay ‘Way From My Door” (Flash Flood Edition)

FRIDAYS ARE FOR FRANK: “Swinging On A Star” | Sinatra Memorial Returns to 415 Monroe Street