The US Army Corps of Engineers (USACOE) have announced that they will scrutinize NY Waterway’s  proposal for the Union Dry Dock facility based on “evaluation of the probable impact,” in light of the significant public interest.

The City of Hoboken has been at odds with the ferry company over the proposed use of the land for a fueling and repair depot.

“I am calling upon the USACOE to convene a public hearing to take place in the City of Hoboken at a convenient day and time for residents,” said Bhalla, who has already waged a very public battle on this issue.

“Transforming the last piece of our waterfront at Union Dry Dock into a public park and walkway is a major priority of my administration,” said Hoboken Mayor Ravi Bhalla, prior to a rally on April 20. “Our waterfront is the true gem of Hoboken, and we now have a once in a lifetime opportunity to transform this last piece of land into public, open space—just like the rest of our waterfront.” 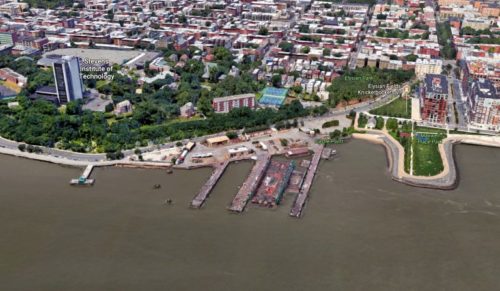 Hoboken wants Union Dry Dock for the purpose of completing the Hudson River Waterfront Walkway and for public open space and recreation. Union Dry Dock bought the Hoboken property in 1976, and have been running their operations there since the 1980s. Previous efforts to sell the land have fallen through. In 2001, the Stevens Institute of Technology planned to construct a soccer field on the site. In 2005, there was a $15 million contract for the property, but the buyer backed out. In 2009, a developer hoped to build residential towers on the land, but local zoning didn’t permit it. And in 2012, New Jersey Transit considered obtaining the land for NY Waterway’s ferry maintenance and refueling.

In June of 2017, Fund for a Better Waterfront began an initiative to purchase the property, sensing the urgency of securing the land for public use.

NY Waterway contends that using the Union Dry Dock location is essential to their service. Critics claim there are other opportunities for the ferry company. The City of Hoboken has suspended its own efforts to obtain the land via Eminent Domain, so that other opportunities can be explored.

“This is a great step towards a regional solution that considers all legitimate interests,” says Bhalla, of the USACOE announcement.