Hoboken American Legion Post 107 is hosting a block party this Sunday, September 9 from 12-5 p.m. to celebrate the ongoing construction of their new community center and housing facility for homeless veterans.

Established in 1920, Post 107 serves veterans of all American wars who live in and around Hoboken, Jersey City and Union City. Following the severe flood damage Sandy in 2012, the Post worked with the City of Hoboken, the Hoboken Rotary Club, Hudson County and the Hoboken Shelter to rebuild its facility. The result of these partnerships was the plan to create six residential units in a new, elevated space that would protect the American Legion from flooding at the ground level.

Monarch Housing, a non-profit affordable housing developer, secured six project-based vouchers for homeless veterans and obtained project financing through federal grants. This project is being partially funded through the New Jersey Housing and Mortgage Finance Agency, the Hudson County HOME Funding Consortium, and the City of Hoboken. The Post is also raising additional funds via community outreach to cover expenses such as furniture, appliances, and other amenities for veterans who will reside in these units.

Construction began on the facility last October, and the top level has now been completed. The job now is to fill it, and keep it filled. To that end, Post 107 invites the greater Hudson County community to come by and pitch in for a fantastic Sunday afternoon BBQ. 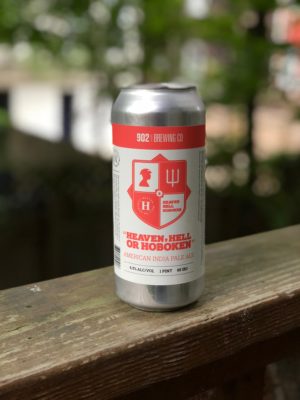 902 Brewing Company will be on hand with their “Heaven, Hell or Hoboken” India Pale Ale. The brewers aligned with Hoboken Post 107 earlier this summer in a fundraising initiative.

“The Hoboken businesses and residents have been so generous in helping the Vets,” says Post Commander John Carey. “This is just another great campaign idea to raise money and awareness for what we are looking to accomplish,”

“Heaven, Hell or Hoboken” IPA is brewed in honor of the troops who fought in World War I and deployed out of the port of Hoboken. The beer itself is a 6.5% ABV, 65 IBU, American India Pale Ale—and it’s fantastic (having been vigorously field tested by hMAG personnel). It has a very light caramel backbone with a subtle bitterness, and a hop burst of grapefruit, citrus, and passion fruits. Straw in color, hopped with simcoe, nugget, and cascade, it’s perfect for any occasion.

“We heard about the rebuilding of the American Legion and thought it would be a great way to give back to the Hoboken community that has embraced us,” says Colby Janisch, President of 902 Brewing.

All are welcome to come by the Post on 2nd Street, between Willow and Clinton. Donations accepted, and greatly appreciated.

OPINION: Tom Hagen for President in 2020