(ABOVE: photo by Joe Epstein/JoeEpsteinPhotography.com)

Hoboken American Legion Post 107 will hold a special fundraising event on Thursday, January 11 to help secure funds needed for rebuilding efforts in the wake of Superstorm Sandy and raise capital for a new Community Center and Housing for Homeless Veterans.

The event will be held at Kolo Klub (1422 Grand Street) from 6:30 to 9:30 p.m. and feature live music, open bar and raffle prizes. Furthermore, a Flat Screen TV, 2018 tickets to New Jersey Devils, New York Giants, New York Jets and New York Yankees games, Military paraphernalia and restaurant certificates are just some of the exciting items that will be up for bid in a silent auction.

Tickets are $85 and can be purchased by CLICKING HERE. Corporate donations are also being accepted and sponsorship opportunities are available.

Established in 1920, Post 107 serves veterans of all American wars who live in and around Hoboken, Jersey City and Union City. Following the severe flood damage Sandy in 2012, the Post worked with the City of Hoboken, the Hoboken Rotary Club, Hudson County and the Hoboken Shelter to rebuild its facility. The result of these partnerships was the plan to create six residential units in a new, elevated space that would protect the American Legion from flooding at the ground level. 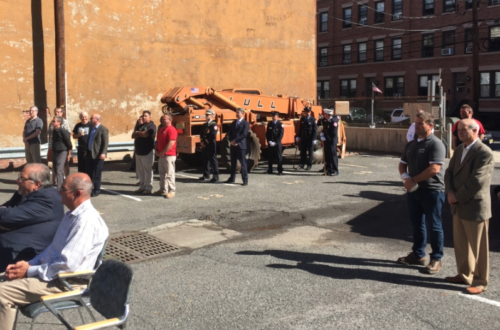 All of the proceeds from ticket sales and auction items on January 11 will go towards a $1 million capital campaign for the development of a full-scale facility at the American Legion’s existing site at 308 Second Street. The new facility will provide an enhanced level of operations and vital resources to veterans in the local community.

The initiative to build housing for homeless veterans and support services is the first of its kind in the United States by an American Legion post.

FRIDAYS ARE FOR FRANK: Sinatra Idol Contest 2017—A Preview of This Year’s Contestants