(ABOVE: Scooter left discarded on the corner of Newark and River Streets on Thursday, October 3—Lucinda Mercer photo)

A 26 year-old Hoboken man has been arrested for allegedly operating a scooter while under the influence of alcohol.

Sgt. Burke attempt to stop Cutrone, who fled on the scooter he reportedly swayed back and forth, appearing as if he was going to lose control at any moment. Cutrone stopped the scooter a block later, and reportedly failing a field sobriety test, which was conducted by Officer Edward Lepre, he was placed under arrest.  Cutrone refused further testing at Hoboken Police Headquarters, and he was charged with DWI, Reckless Driving, and Refusal to Submit to breath samples. Cutrone was later released to a responsible party.

Scooters in Hoboken have been under intense scrutiny since their rollout on May 20. A rider was arrested a month later for attempting to flee police on the Waterfront after colliding with a pedestrian. Last month a scooter collided with a mother and child on the sidewalk, prompting Hoboken City Council to crackdown on safety with bans in parks and on the Waterfront. Independently sourced footage indicates that those bans have been widely ignored.

Nevertheless, the program’s popularity in Hoboken is significant, with Lime most recently reporting 390,000+ trips by over 60,000+ unique riders since May. Riders enjoy the ease and convenience of the rideshare scooters, as a way to navigate short journeys around the Mile Square City and its traffic-choked thoroughfares.

Hoboken City Council recently voted 8-0 to approve a proposed new contract with Lime that will see 35 cents per ride go to the City for the duration of the pilot program. That money is reportedly meant to be invested in enforcement, education tools, and enhanced transportation infrastructure—including protected bike lanes.

Hoboken’s e-scooter rideshare pilot program is set for review in November, at which point the City will decide whether to maintain the agreements or terminate the program. 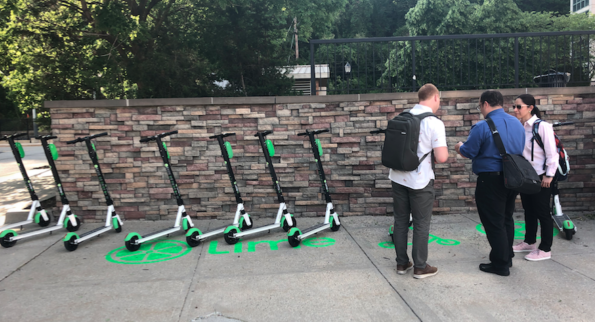 UPDATE—NOT THE FIRST ARREST:
hMAG initially reported this as the first scooter DWI in Hoboken. Turns out we were wrong…

“Our department is always proactive in the area of DWI Enforcement. We do this in order to keep drunk drivers off the roads so that they don’t have the ability to hurt anyone including themselves. Just three weeks ago, we had five DWI Arrests on a Sunday evening during a six hour period,” said Hoboken Police Chief Kenneth Ferrante. “A person can be arrested for DWI for operating any vehicle or mode of transportation that is not muscle powered. With new legislation signed by Governor Murphy in May of 2019, E-Scooters were added to our roadways. Operators of them, if found to be intoxicated, will be arrested for DWI and face the same penalties as if they were operating a car. [An arrest on October 13] was our third DWI arrest for an individual operating an E-Scooter. The first individual fell off an E-Scooter while intoxicated, and sustained multiple non-life threatening injuries including fractures. That occurred on August 14th on 6th and Hudson St.”

Arrests Made After Woman is Pepper-Sprayed & Robbed in Hoboken