The Alcohol Board of Control disciplinary hearing for HUB Hoboken set for last Thursday has been rescheduled for October 25. The nightclub will remain closed until then, due to an incident in which a number of lewd acts were committed on the bar, in full view of staff, at an event promoted by the club. 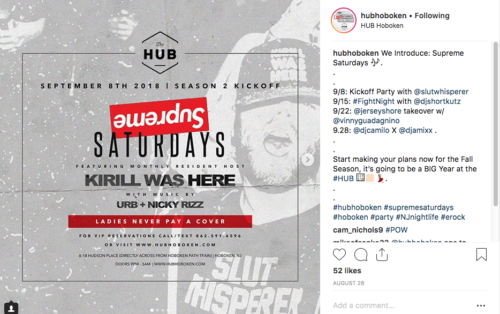 An individual by the name of, “Kirill,” a.k.a. “@Slutwhisperer,” had a sponsored appearance at HUB on the night of the incident.

Now infamous videos show an emcee, who stood on the bar at Hoboken nightclub and sprayed champagne on a unnamed female who was in a state of undress. At that point, male clubgoer engaged in acts with the female on the bar. The resulting video has subsequently gone viral.

According to Jeffrey Garrigan, the attorney representing HUB Hoboken, the man in the videos appears to be a police officer in Pennsylvania. “It is believed that the male is employed by the State of Pennsylvania as a law enforcement officer and it is our sincere hope that arrests are imminent for their lewd conduct which has seriously harmed our reputation,” said Garrigan, in a statement to the press. He did not reveal the man’s identity.

Hoboken Mayor Ravi Bhalla has called the incident, “an affront to human decency and a horrific objectification of women,” and vowed serious repercussions. “I will use all my powers as Mayor to make sure it never happens in our City again. Accordingly, I have directed the ABC Prosecutor to vigorously seek the permanent revocation of HUB’s liquor license, the severest penalty available under the law.”

Hoboken Police Chief Kenneth Ferrante said, “I saw videos of activity that I never could imagine would occur anywhere, especially in a business open to the public with a liquor license approved by the City of Hoboken and State of New Jersey. To state that this conduct will not be tolerated by the Hoboken Police Department is a major understatement.”

According to Hoboken City Spokesperson Santiago Melli-Huber, “There was originally a special meeting scheduled for the 20th, but The HUB requested the hearing be held at the next regularly scheduled ABC Board meeting on October 25. The request was granted on the condition that The HUB remain closed until then.”

As of yet, there have been no charges filed against any of the individuals directly involved with the incident. Meanwhile, management at the establishment vow full cooperation with the investigation.

Wetting Their Whistles for Dry Dock Petition: Fund for a Better Waterfront Hosted a Kickoff Event for Their Latest Public Park Effort

FRIDAYS ARE FOR FRANK: “A Nightingale Sang In Berkeley Square”